I have just published my first book; Ideas@work. It is about how to manage the suggestions programme or what is more popularly known here in Singapore as the Staff Suggestion Scheme or SSS. 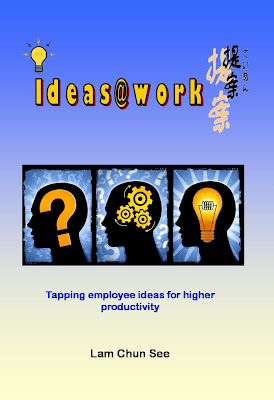 To explain what this book is about, its aims and the readers it is targeted at; I have reproduced below, word-for-word, the Introduction I wrote in this book. Briefly this is what it says;

This book is mainly, but not exclusively, for managers in companies that already have, or wish to introduce the SSS. This would include most companies in Singapore that want to vie for the Singapore Quality Class or Singapore Quality Award because Employee Involvement is one of the key areas that they will be assessed on.

There are three main avenues that such companies should adopt to systematically involve their employees in the total quality process; Quality Circles, 5S and SSS. Of these three, the most difficult in my opinion is the SSS. Hence I have decided to write about SSS instead of 5S which I have more experience with. The other reason is that there are not many good books on SSS in the market which focus on the heart of the problems that companies face and come up with a comprehensive yet simple model to address them. I have also tried to craft my book in a style that will make it an easy read for busy executives.

Initially I published my book at the online book store, Lulu.com. However, the performance has been quite dismal and I have decided to republish at a later date as an ebook. Meantime, if you are in Singapore and Malaysia; you can still purchase the print copy at S$18. Details at the side bar. 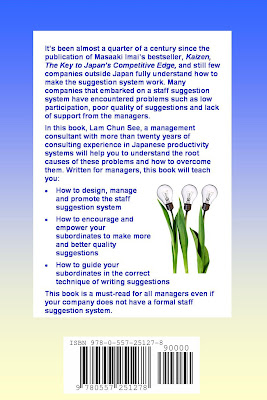 Email ThisBlogThis!Share to TwitterShare to FacebookShare to Pinterest
Labels: My book on Suggestion Systems

Government bodies treat suggestion scheme started years back like something being instructed from the 'top bosses' and has to be implemented. However the management does not motivate the staff sufficiently enough. Hence through the passage of time, the scheme loses steam and become somekind of a grinding-routine or a lackadaisical undertaking. Currently our top government leaders are now shouting a battle-cry to resuscicate the weak productivity movement. I hope this time it would be on-going and sustaining, not fits and starts.