Tomorrow will be better than Today

In 1988, when I was working as a (quite young) management consultant with the National Productivity Board (NPB), I was assigned to Tat Seng Paper Containers Pte Ltd as a part-time productivity manager. At that time, NPB had a scheme called Promis. Promis stood for Productivity Manager in SME, a term coined by our then chairman, Mr Mah Bow Tan. The idea was to let promising SMEs engage the services of a productivity manager even though they were too small to afford such a full-time staff. I think I spent two days a week there for about a year.

Anyway, when I was there, the first thing I did was to organize a series of productivity talks for all the employees. The four topics that I chose were:
a) What is Productivity?
b) The importance of Good Housekeeping
c) Cost Reduction through Reduction of Waste
d) Quality Awareness
Together with the productivity committee, we then launched a company-wide productivity movement called 3Ps. 3Ps stood for Productivity Promotion Through Participation. (通过参于活动提高生产力)
(By now you must be quite amused at how fond we government officials were of using acronyms. Sorry, you’ll have to bear with it because there’s more to come.
Haha.) 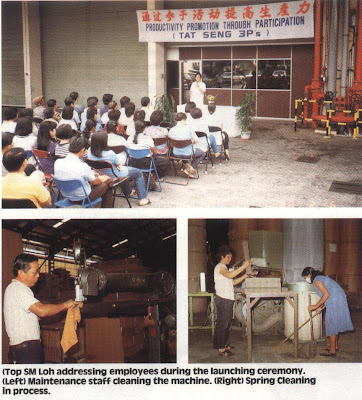 From the April 1988 edition of Productivity Digest
The 3Ps programme I introduced was further made up of 3 initiatives (each beginning with the letter S).
These were:
a) The 5S programme
b) Safety promotion
c) Staff Suggestion Scheme (SSS)
To cut a long story short, we decided to launch our 3Ps programme with a Big Clean Up. We chose a Saturday which was just before the Chinese New Year to do this. The GM, Mr S M Loh, myself and our Japanese advisor, Mr Suzuki made short speeches. This was followed by some refreshments and the Big Clean Up. Everybody, including the GM rolled up their sleeves to clean up the factory.
Whilst the cleaning action was going on, we played a song over the public address system that I had specially chosen for that occasion.
Yes, you’ve guessed it. The song was 明天会更好 (Tomorrow will be better)
Now here is a quiz question for you. Why did I choose this song?

Answer.
Productivity is, above all, an attitude of mind. It seeks to continually improve what already exists. It is based on a conviction that one can do things better today than yesterday and better tomorrow than today.
(From the report of the Rome Conference - European Productivity Agency, 1958).
Posted by Lam Chun See at 03:44

For those who are aging, will tomorrow be better? Can we dare hope?
Makes you think doesn't?
Great Post, my friend.

I thoroughly enjoyed listening to this Chinese version 明天会更好 (Tomorrow will be better) As for the aging group, remember Hope springs eternal in the human breast so we must dare to hope.

It is said that long life of a person is much treasured but it the value one creates in his life, no matter how little, is most important. Sometimes I see old people lying or sleeping around in void decks on concrete benches, without indulging in useful physical or mental activities, I really feel sorry for them, although I am an oldie myself. Even a retiree not working can be useful. He involves himself in volunteering work, do things that he had missed out during his working life, pursuing his hobby if any, learn new things and the list goes on. Finally, what is wrong in helping out housework or look after his grand children? at least keeping himself physically mobile, and mentally alert. Lying or sleeping around idly is not a good choice, thinking that this is a way to enjoy a relaxing life, but in actual fact such loafing around could make him go to the 'other side' faster.