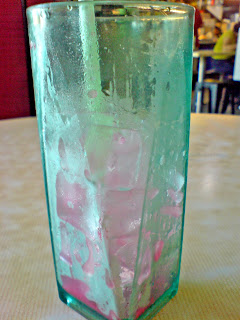 I notice that in Singapore, whenever we order a cold drink at a hawker centre or food court, it’s a common practice to get much more ice cubes than we really need. Much of this ice is simply discarded later. Overall, this results in tremendous amount waste of energy and water for our country; not just to produce the ice, but to transport it and preserve it.

With the ongoing concern for the environment and efforts to go ‘green’; I think we can do something to reduce this wastage. For example:

1) Launch a campaign to persuade Singaporeans to take their drinks without ice. Often when we order canned drinks, they already come chilled anyway. Why not save yourself 10 cents and help save the earth?

2) Launch a campaign to educate drink stalls to serve less ice. I suspect that in some cases, such as fruit juices, they give you more ice so that they can cut down on the amount of juice they serve.

3) Come up with a practical way to recycle the ice cubes. Of course I do not mean to re-use the ice cubes for drinks. One area I can think of is to re-sell it to the fish mongers at nearby wet markets who require large amounts of crushed ice. Here’s how. Every food court and hawker centre should be equipped with a large ice box. The cleaners should rinse the leftover ice cubes and store them in the ice box. The next morning, if it is a hawker centre next to a wet market, the fish mongers can help themselves to the ice. Maybe they can be charged a nominal fee. 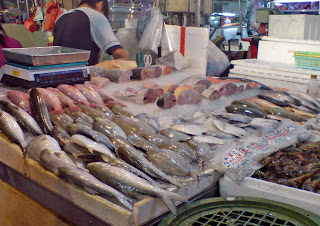 In fact, last month I put forward this suggestion to Reach. They relayed it to the relevant ministry which then gave me an acknowledgement and a promise to look into it. It’s been more than a month and I have not heard again from them. I doubt I will ever hear from them again :(
Posted by Lam Chun See at 20:28

The feedback to reach is good and the authorities should consider this suggestion which mainly targeting on owners of coffeeshops, food centres and other eating places, but I really believe that this problem is linked to the operators' mindset, that convenience and time-saving are upper most in their minds when coming to discarding of ice cubes, despite incurring cost. They fully know that disposed ice cubes can be collected and recycled later as used water but still want the ten cents profit per cup which adds up to a lot if many customers want extra chilled drinks, and by not doing so may displease his customers, making them go to their competitors. Short of manpower and time, make these owners relunctant to pitch their sale of ice cubes to fish-mongers, thinking that such recycling is not cost effective. Furthermore, fish-mongers have their own regular suppliers of ice blocks (of various sizes) which they deem better than recycled ice cubes. Thinking of the hassles involved, owners and fishmongers are likely to be resistant to the idea of selling and buying of recycling of ice cubes. Government authority may also be dampened to this suggestion thinking that the national message of water conservation should be sufficient, meaning that it covers ice cubes as well. Why make the extra effort when the cost-saving saved is small, as compared to the huge expense of conducting a national educational programme. Anyway, trying to change these people mindset, is a daunting task.

>The cleaners should rinse the leftover ice cubes...

Besides additional work for the already hard-pressed cleaners, after rinsing in water, there won't be much ice left. But I think the main concern is that it is unhygenic to do so. What if people get food poisoning after eating the fish? Will there be another food-poisoning scandal similar to the recent Rojak one?

I have never been to the Jurong Fishery port and therefore not able to visualise those night-to- dawn activities carried out there, but last night after watching a tv programme on fish trading activities carried out Japanese at a very busy centre near tokyo, I learn a little of this intricated trade. There was a scene related to this topic of ice cubes. Successful bidder of fish would summon workers to pack meticulously same category of fish of similar sizes neatly by rows separated in layers by transparent plastic sheets. Finally the fish are packed into a container, meanwhile small ice cubes are added in to keep them fresh. These ice cubes are the very same ones that resurface together with the fishes displayed in the wet market stalls. Hence is there a necessity for outside sources to supply ice cubes to the fishmongers? Perhaps only the ice blocks are sourced from external suppliers. After watching the tv programme, I realise that I have some wrong ideas of this fishing trade.

I must admit the part about coming up with "a practical way to recycle the ice cubes" needs a bit of study. I was thinking of a huge ice box like those that I saw at the kelong where they provide for us to keep our catch (fish).

The govt can operate it like the way they operate the public toilets. Provide the cleaners the box foc. He will collect the ice cube and chuck them into this box. At the end of the day; hose them and drain our the dirty water through a hole at the bottom. When he sells this recycled ice to the fish mongers, he can get to keep the money.

As for manpower costs, you may recall a time when nobody bothers to collect the drinks cans but nowadays, I often see old ladies waiting for me to finish my drink so that she can collect the can.

Talking about drink cans, even in the early sixties people joked that when they scraped the bottom of a Japanese car they could see the word ovaltine printed on it. This proved that tin cans in the form of scraps were still being collected at that time but perhaps not so visibly. Now you often see many old folks collecting cans to make a living. Have they got any choice? Because of their poor physical condition what can they do except lighter jobs like collecting bowls, cups and utensils in a eating place or scravenging for tin cans and cast-away carton boxes (when the country is pushing for high tech). These old people are so visible nowadays mainly because of our fast aging population which was not so during the earlier years. In fact during the fifties and the sixties, the rate of Singapore population growth could considered very high, remembering that during a certain period of time, KK hospital produced a record number of babies (even by world standard).

Nice post. It is always good to see people expressing themselves in different ways.

Since you seem to be associated with Management, I would like to suggest you a new magazine - PEOPLE MATTERS started by an ISB Alumni, which was suggested to me by a friend and which I have found very useful.

It deals with various important aspects of management, especially those related to Leadership & People Management, which the mainstream business publications often ignore.

It's also relatively cheap. I guess its annual subscription is about Rs. 400 (US$ 8 approx) which is even less than the cost of a standard Pizza.

Their last issue had an enlightening article by Robert Kaplan (the co-founder of Balanced Scorecard method, if you remember) where he talks about how organisations can create opportunities out of current economic downturn.

I got its subscription online through their website: http://www.peoplematters.in

If you like the magazine, kindly refer it to your friends or colleagues in the organization you work. They may be interested in subscribing to it.