Get Rid of Clutter 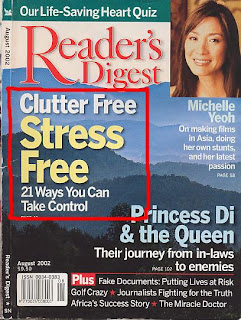 I once read in the Readers Digest of a profession known as Clutter Consultants. These are people who you hired to come into your homes to help you to literally put your house in order. And yes, you might have guessed as the author did, that this could only happen in America, the land of plenty.

The first thing this clutter consultant is likely to do is to get you to practise what in 5S is called Seiri, or Clearing. You have to sort your stuff into necessary and unnecessary; and get rid of the latter. Give, sell, throw; it doesn’t matter. Just don’t keep them lying around. And as one Japanese author put it; you have to be ‘ruthless’.

This is the most fundamental first step towards higher productivity. Many of us have a habit of keeping things which we cannot decide whether or not we needed. In other words, we procrastinate. The first rule in 5S is; When in doubt, get rid of it. Of course this may sound a bit extreme. At the very least, I would say, you should make a decision to decide later. By that I mean, mark those things that you cannot confirm are truly unnecessary. Come back to it X number of months later, and if you still cannot find any use for it - dump it!

But what if I accidentally throw away something that I later discover that I actually needed? Well too bad. It’s a risk we just have to take. The alternative is to keep on procrastinating until we have accumulated a mountain of junk; and then the task simply becomes too daunting, and we give up altogether.

Here are some tips for carrying out Seiri.

1) Do it regularly; daily or weekly or monthly depending on the item. This will prevent the problem building up into a gridlock as mentioned above. For example, for emails, we should delete the obsolete and junk emails at least once a day. A manager once told me he had a subordinate who actually kept several hundred emails in his In-box!

2) Apply Seiri to everything; not just at work but at home. Not just physical things but also intangible things such as emails, addresses/contacts, steps in work procedures etc. One writer even said we should get rid of useless thoughts and habits! I say, don’t forget your own body. Get rid of the useless fats.

3) Set some rules. For example – No more than 10 emails in the In-box. Create a separate KIV folder. File all read emails required for future reference in separate folders and review them once a month.

4) Practise prevention. Think of ways to prevent junk from appearing in the first place. Timely advice you may say, considering that the Great Singapore Sale has just started. Those of you who use emails regularly must have learnt some tricks about how to prevent spam. Anyway, techniques for preventing clutter actually belong to the 4th S which is Seiketsu. More about that later.

In conclusion, I have only this simple advice. Do it now. And start with those places that you have never looked at for a long time. You will be surprised just how much junk you have acquired. Even for stuff which you use regularly, the stationery tray in front of you, the book shelf next to you, your CD collection etc. I guarantee that you will be able to find some junk if you looked hard enough.

And you will also surprised how good it feels to be rid of these junk. 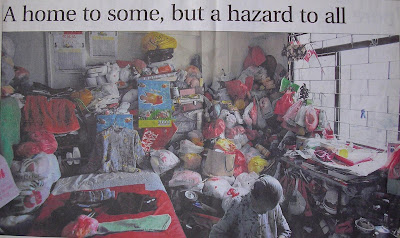 This picture is from an August 2006 Straits Times article about cluttered homes belonging to some old folks which are fire hazards and breeding grounds for bugs. Volunteers visit these homes and try of help the owners to clean up. But “getting people to part with their possessions can be tough”, wrote the reporter Yap Su-Yin.

My wife and two daughters, especially the younger one, simply love to shop, in particular clothings until their wardrobes are bursting at the seams. Luckily my wife also like to clear clutters. So we clear all the old clothings, as the new ones keep coming in, put them in large plastic bags ready to deposit them at the Salvation Army collection point at Bishan. I believe the old clothings being in good condition are useful for recycling, but sending the to Bishan is a bit of a hassle, so I thought out a new idea, why not place them in at a corner of my estate near to my house and let our waste collector do the job, benefiting him at the same time. True enough whenever we place old clothings or unwanted items, they disappear instantly in the next morning. This shows that recycling is working well in Singapore.

I do practise some of the tips given. I have read some feng shui articles saying that a cluttered home is also not good for our health, mentally and even physically sometimes.

fr: This is good feng shui principle has scientific bearing because no matter how careful we store our old things they still gather dust, deteriorate, gather mould, hence not good for health. Therefore discarding them is a good solution. I also believe in feng shui - the scientific aspect, not those superstitious stuff. For example, living next to a hospital is not very condusive. The reason is hospital is full of germs, andntherefore living near it may cause the residents nearby be infected by virus, definitely not a good fengshui practice.

Great article, I enjoy reading your work! I am going to put a lot of your suggestions to good use when I move out...Here's another useful tips on how to get rid of clutter