I am one of those lucky Singaporeans who get not one, but two free newspapers delivered to his doorstep practically every day. From Monday to Friday, I get My Paper; and from Monday to Saturday, I get Today. In addition, I subscribe to the Straits Times.

It was raining this morning (Saturday) and as usual our free copy of Today was totally ruined by the rain as the delivery man didn’t bother to throw it further into our driveway. On the other hand, our paid copy of the Straits Times was nice and dry.

So why the difference? I can only surmise that the difference lay in the attitudes of the delivery men. In the case of the Straits Times, the vendor knows that if the newspaper was damaged by the rain, we would complain and he would have to make another trip and compensate us. In the case of the Today, he probably thinks; “Ah .. it’s free, so these people won’t dare to complain” .... and he is right. 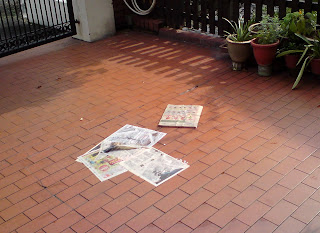 Photo above - my neighbour's newspapers; below - ours. 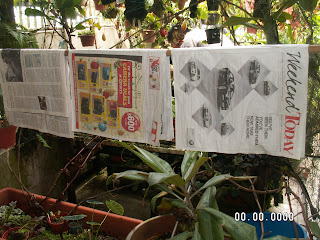 The other day I had to use the public toilet in a shopping centre in the Bukit Timah area. To my horror, I saw that somebody had removed the entire roll of toilet paper – and these are the commercial rolls which are much bigger than the normal ones we used at home – and dumped them on the cistern. When I brought it to the attention of the toilet attendant/cleaner, he told me this was a common occurrence. “What to do? Free one; not their own money; so anyhow waste lor!”.

Sigh. How depressing to hear this. But never mind. Let me cheer you up with a joke.

Early in my career, I worked as an industrial engineer in Philips. We had many Dutch expatriates; but my boss was a Belgian. It was really fun to attend social functions with these people because they liked to trade insults/jokes about each other's country. I remember this joke told by my Belgian boss. He said; “If you drove from Belgium into Holland, how would you know that you have crossed the border? Well you can easily tell by the rolls of toilet paper hanging out to dry in the backyard. They use it at least twice, you know!”

That's right Chun See
Just because it is free, the delivery man simply throw the paper. Very often when it rains, I have wet papers.
I complained once. It stopped. When there is a change of delivery man, it happens again.